The February 2022 calendar from AstroSage is here with all the information you need for the month. Take a peek at all the festivals, fasts, and holidays that you will encounter this 2022. 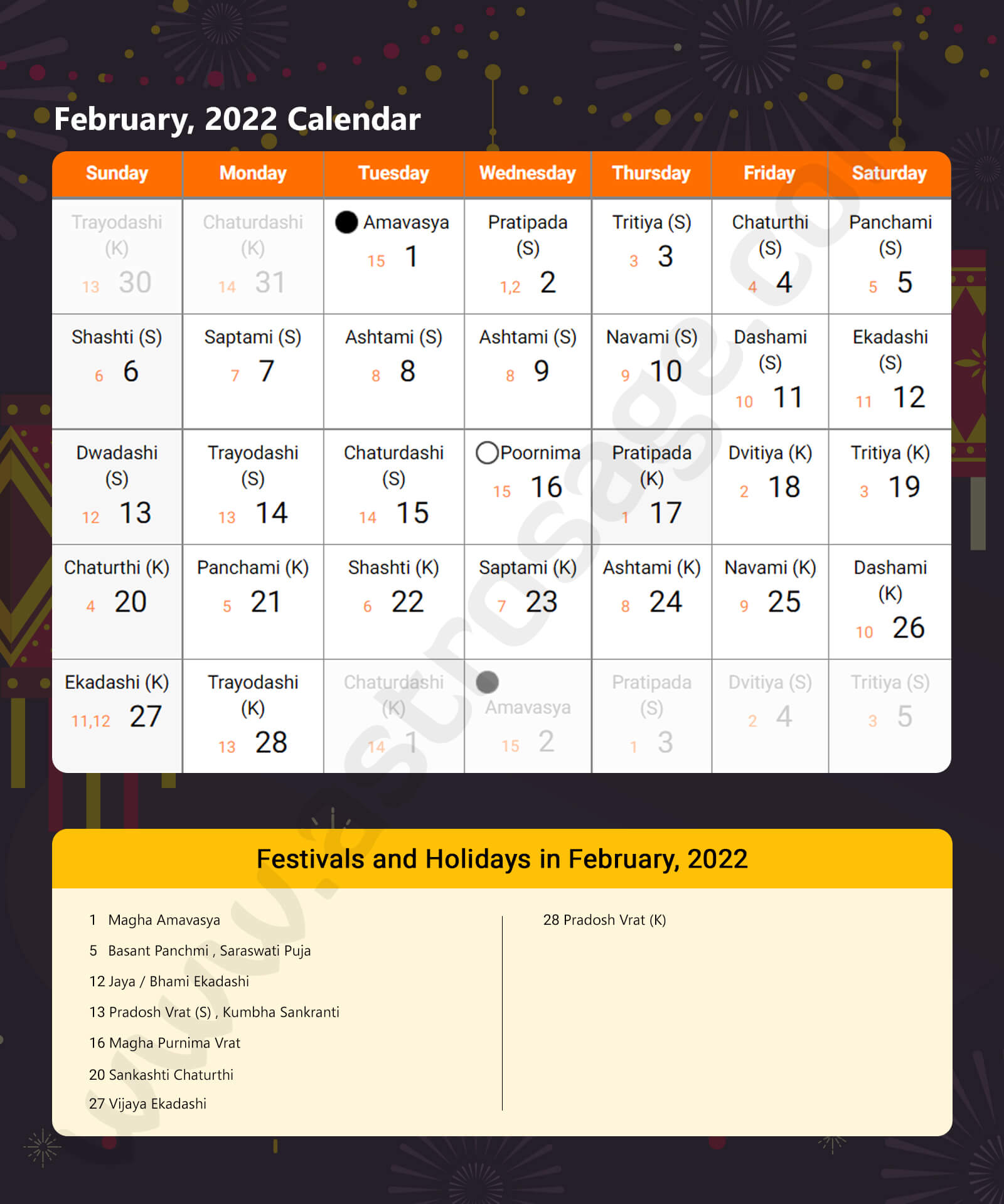 A calendar is a system of organizing dates, days, and times – to keep a record of significant fests and other important events. Various calendars are used around the world and have been prevalent for a long time. The most common way of timekeeping has been the Gregorian calendar with the seven days and twelve months. The days are Sunday, Monday, Tuesday, Wednesday, Thursday, Friday and Saturday; while the months: January, February, March, April, May, June, July, August, September, October, November, and December. Yet, different areas still prefer depending on traditional tier calendars for the calculation of their significant festivals and such. In the same vein, although the Gregorian Calendar is used for all administration tasks in India. However, for the computation of dates of our major festivals and fasts, the Panchang is taken into account.

Even though the Hindu Panchang is one of the more renowned calendars of India, however, numerous others are given priority in different states. For example:

The Indian calendar is more complicated than the Gregorian one. While the latter adds days to a month every four years, to make up for the mismatch between the 354 lunar and 365 solar days; the former follows a more intricate pattern. In order to maintain the integrity of the lunar month, the Indian calendar 2022 includes an entire month (Adhik Mas) every few years through elaborate calculations.

The Monthly 2022 calendar here uses the Gregorian pattern; however, the fasts and festivals are calculated based on the Indian calendar. Unlike the prevalent New Year falling at 1 January, the Hindu New Year falls in April-March, in the Hindu month of Chaitra. Let us take a look at how the months from both formats match and differ from each other:

The Jain calendar 2022, much like the Vikram and Shak Samvat Panchangs is a lunisolar calendar. It includes an extra month every three years to match the lunar days with the solar days, and its dates are known as Tithis. Here are the months of Jain monthly calendar 2022, and how they coincide with the Gregorian calendar:

Unlike the Hindu panchang and its various classifications which are lunisolar, the Islamic Calendar or Hijri Calendar is entirely a lunar one. It is based on the phases of the moon, and thus, there are only 354 or 355 days in the 12 months. As a result, the Islamic Calendar is shorter than the Gregorian one, and shifts according to it consistently. Each of the twelve months of the Islamic calendar has a meaning associated with it. These are:

The Panchang commonly used in the state of Tamil Nadu and its residents is the Tamil Calendar. Its months coincide with the Hindu Panchang, like all other alliterations of the Panchang, however, the names differ slightly, as:

The Chinese Monthly Calendar is a lunisolar calendar similar to the Hindu panchang in specific ways. Much like the Panchang, the Chinese calendar also has 354 days in a 12-month-year (common year), and to compensate for the mismatch in the lunar and solar days, they include an extra month almost once every three years, which is then called a long year. The months in the Chinese Calendar were originally named after natural phenomena – the Phenological names of the months are associated with fauna and plants. On the other hand, the Earthly Branch names of the months are given as per the ordering system of twelve Terrestrial Branches. The modern way of naming the months include numbers as a month name. Let us take a look at all these naming systems and how the Chinese months correspond with Gregorian calendar:

We Hope That You Find This Article On Monthly Calendar Enlightening! Thank You For Being a Part Of AstroSage!