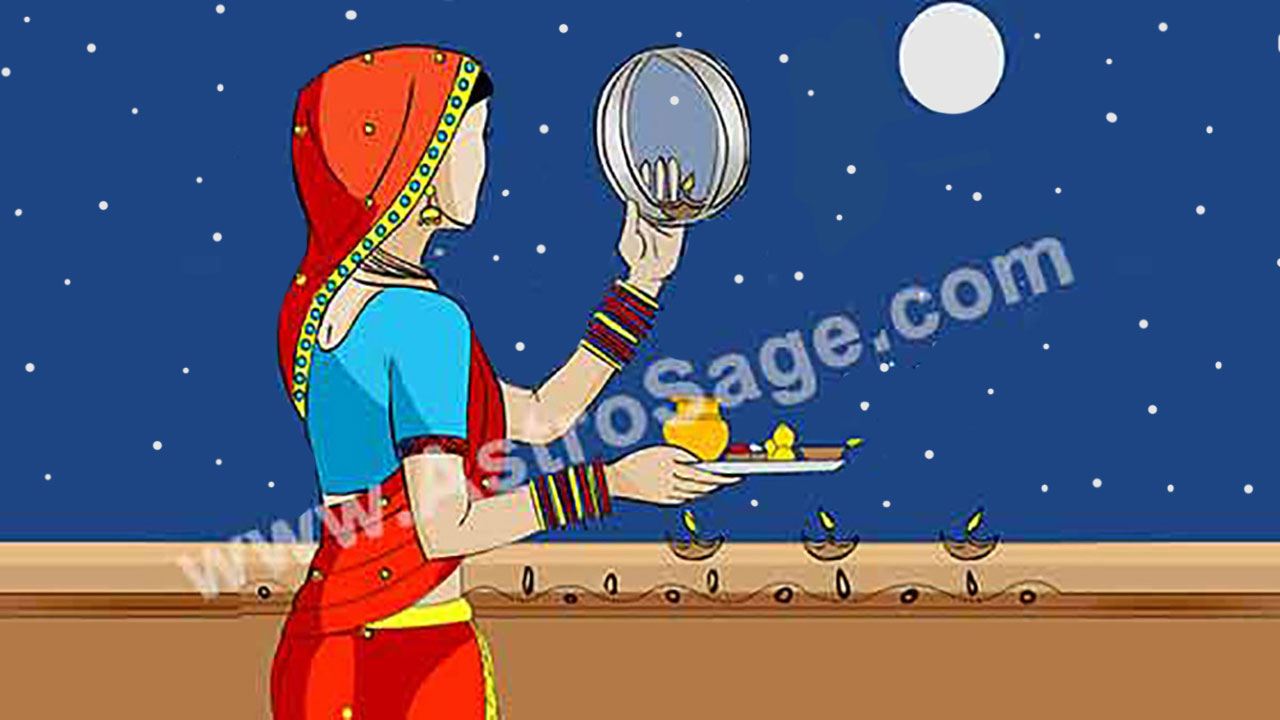 Karva Chauth is celebrated on the fourth day of the dark half in Hindu month Kartik. On this day, married women keep fast to elongate the life of their husband. Those who are unmarried, keep this fast to get a good husband in future. Festival of Karwa Chauth is celebrated with great zeal and gusto in North India.

1. The fast begins before the sunrise and runs till the visibility of Moon. Only after the sighting of Moon, this fast is considered complete and one can have food.

2. In the evening, 1 hour before the Moonrise, the family of Shiva (Lord Shiva, Goddess Parvati, Nandi, Ganesh Ji, and Kartikeya Ji) is worshiped.

3. The idols or pictures of the gods should face west direction while worshiping; whereas, the worshiper should sit facing the east.

As per the legend of Karva Chauth Vrat Katha, a moneylender had 7 sons and 1 daughter named Karva. On the day of this festival, Karva observed fast. At night, when everyone sat for the dinner, brothers of Karva insisted her to eat as well. But, she denied because Moon had still not arisen and she could have food only after giving Arghya (offering water) to the Moon. Her brothers couldn’t see the condition of their starving sister who had not even taken a single drop of water since dawn. The youngest brother planned to trick her by lighting a lamp behind the leaves of a Peepal tree, giving an illusion of the Moon. He convinced his sister that the Moon has risen and now she can have food. She got tricked and had a bite of food. As soon as she took the bite, the news of her husband’s demise came. Inconsolable, she kept the body of her husband till 1 year and kept on collecting the grass growing over the dead. Next year, when Karva Chauth came again on the fourth day of the dark half in the month of Kartik, she kept the fast again following all the rituals properly; and, Karva Chauth story says, her husband came to life.

1. Before the sunrise, wake up, get ready, and clean the worshiping place. After that, take the food given by mother-in-law. Then worship the god and take the vow of keeping a fast without water.

2. The fast should be completed only after sunset, after Moon sighting. During the fast, not even a single drop of water should be taken.

3. In the evening, place the idols or pictures of gods and goddesses over an earthen platform. Keep 10 to 13 special earthen stoups for Karva Chauth (known as “Karva” in Hindi and Punjabi) as well.

4. Take a plate for worshiping and put Dhoop (incense), Deep (wick lamp), Chandan (sandalwood paste), Roli (powder made by mixing turmeric and slaked lime), Sindoor (vermillion), etc. into it. The lamp should have enough Ghee (purified butter) that the wick can light for a longer duration of time.

5. The worship should begin 1 hour prior to the Moon sighting. It will be better if all the women of the family could worship together.

6. Recite the Karva Chauth Katha during the worship.

7. The Moon sighting should be done through sieve. Offer Arghya to the Moon and worship Him.

8. After Moon sighting, the daughter-in-law takes the blessings of the mother-in-law after offering her a decorated plate with sweets, fruits, dried fruits, money, etc. The mother-in-law blesses her with the boon of everlasting good luck.

The Karva Chauth festival in Punjab begins with the Sargi. It is consisted of a special meal taken by the women before the dawn on the day of Karwa Chauth. The main part of the meal is Fenia (made of vermicelli). If the fast observing woman has her mother-in-law in the home, Sargi is cooked by the mother-in-law. In the evening, fasting women get together to perform the ritual of Feri. They come along with their worship plates and sit in a circle. Further, they rotate their Thalis (plates) in the circle while reciting the Karva Chauth Katha (story). In some parts of the country such as UP and Rajasthan, women worship Gaur Mata. The idol of Gaur Mata is usually created by cow dung.

1. Why is Karwa Chauth celebrated?

Karwachauth is observed by married women for the longevity of their husbands. This festival is observed on the Chaturthi Tithi in Karthik month during Krishna Paksha.

2. Can unmarried girls do Karwachauth?

Yes, they can. Also, there is no compulsion for them to end the fast after sighting the Moon.

3. What should married women do on Karwa Chauth?

Married women should wake up early, bathe, have Sargi and resolve to observe fast. After sighting the Moon and venerating Lord Shiva, Maa Parvati and Lord Ganesha, she should consume water and food.

We, at www.AstroSage.com, wish you a very happy Karva Chauth!