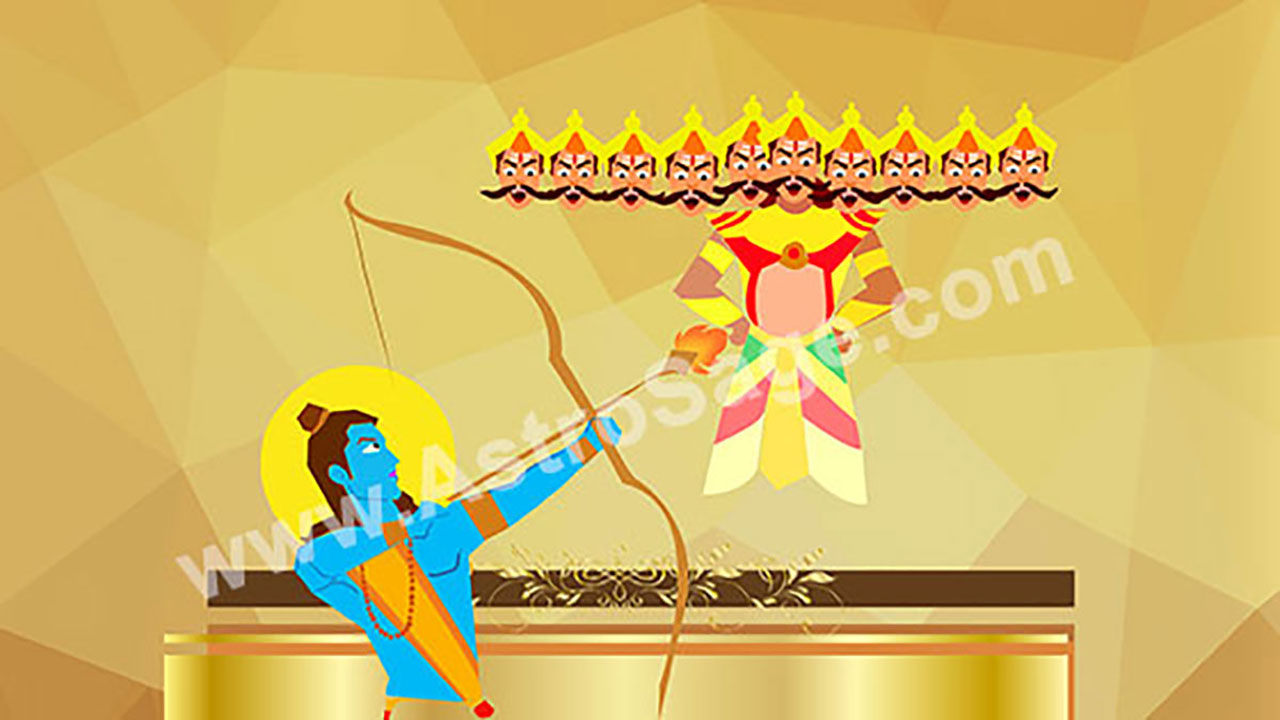 Dussehra is celebrated on the day when Dashami Tithi (tenth date) of the Shukla Paksha (bright fortnight) of Ashwin month is prevailing during the Aparahan Kaal. The festival is celebrated to remark the victory of good over evil because on this day, Lord Rama had killed Ravan. At some places, the festival is also known as Vijayadashami, as it is believed to be associated with the Goddess Vijaya. Some people also know this festival as Ayudhapuja.

Shravan Nakshatra also affects the Muhurat of Dusherra. The logics are given below:

Aparajita Puja is performed during Aparahan Kaal. The Puja Vidhi is given below:

Aparajita Puja is the main part of Vijay Dashmi for the worshippers. However, there are some other worships that are done on this day; check them below:

1.  When sun sets and few stars get visible, this duration is called Vijaya Muhurat. In this duration, any Pooja or work can be initiated for the best results. Lord Rama had defeated the King of Lanka, Ravana by starting his journey for the war in this Muhurat. At this time only, a Shami tree had taken the bow of Arjuna (this bow was named Gandiva) to keep it safe.
2.  Dusera day is considered one among the most auspicious days of the year. It is one of the Sadhe Teen Muhurats (three and a half most auspicious Muhurats of the year - Chaitra Shukla Pratipada, Ashvin Shukla Dashami, Vaishakh Shukla Tritiya, and Kartik Shukla Pratipada (half Muhurat)). The entire day is considered auspicious for beginning or doing anything. However, certain Muhurats can be considered for some particular Pujas.
3.  Kshatriyas, warriors, and soldiers worship their weapons, which is known as Ayudh Puja. They also perform Shami Pujan. In the old days of Kingship, this festival was mainly considered for the Kshatriyas (royals and warriors).
4.  Brahmins worship Goddess Saraswati.
5.  Vaishya worship their ledgers.
6.  Navratri Ramlila, which is organized at many places, comes to an end.
7.  Victory of Lord Rama is celebrated by setting ablaze the effigies of Ravana, Kumbhakarna, and Meghanada.
8.  It is believed that reciting the âAparajita Stotraâ of Bhagwati Jagdamba on this day is very auspicious.
9.  In Bengal, the grand Durga festival is concluded.

As per the beliefs, the festival got its name Dussara because on this day, Lord Rama had killed the ten-headed (Das Sar) demon, Ravana. Since then, the 10 heads of Ravana effigies are burnt considering each of them as the manifestation of lust, anger, greed, delusion, intoxication, envy, selfishness, injustice, inhumanity, and ego.

Duryodhan had defeated Pandavas in the game of gambling. As promised beforehand, Pandavas had to go for 12 years of exile along with an extra year of hidden life. In that last one year, they had to stay hidden from everyone and if found by anyone, they would repeat their 12 years of exile. For that one year, Arjuna had hidden his bow, Gandiva on a Shami tree and worked for King Viraat with the fake identity of Brihannala. When the son of the King asked Arjuna to help him in protecting the cows, Arjuna brought back his bow from the Shami tree and defeated the enemy.

Another legend states that when Lord Rama began his journey toward Lanka for the war, Shami tree had announced the victory of the Lord.

If you want to relish the real taste of this festival, visit Mysore. The Mysore Dasara Festival is famous for its grand celebration. From the day of Dashahra only, people accelerate their preparations for the Diwali festival.

With this information, we hope that you will be able to make the best out of this day.